The second New Year (also known as the Chinese New Year or the Lunar New Year) has come and gone, and with it, possibly our last long winter break off together. Just like last year, the Chinese university semester break coincides with the holiday giving us several weeks off, which, of course, we put to good use! My program had its mid-year meeting and conference in the Philippines this year, and somehow, Tucker and I managed to squeeze in three (and a half) other destinations on our island hopping itinerary. You might have seen the hundreds of photos on Facebook, but I’d also like to share a few words about our time traveling in South Asia. To be honest, it’s a little surreal to be writing this as I watch the snow fall outside, but here we go! 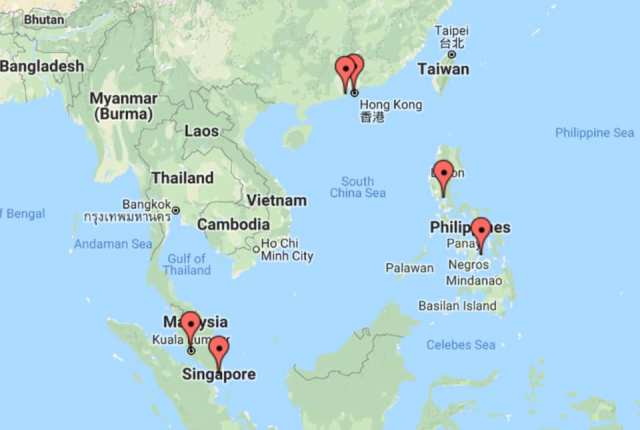 Our first stop was Macau, a “special administrative region” of China. It gets this rather long name due to it being somewhere between a province and another country entirely. It’s a part of China, but it’s also not China, which is actually one of the reasons we wanted to visit. We wanted to see if there were any noticeable differences. We also wanted to visit because we were eager for another taste of Portugal. Macau used to be a Portuguese colony and has retained quite a bit of the Portuguese flair in architecture, food, and language. It was an incredible mix of the two cultures: tons of Chinese New Year decorations along the beautiful mosaic walkways, pork dumplings could be ordered with a side of garlic bread and red wine, and all the signs were in both Chinese and Portuguese, which was very exciting for this language nerd. The weather was beautiful while we were there, so we were able to walk almost the entire city by foot. Macau is made up of a small peninsula and island on the southern coast of China. The peninsula is where the Old Town is with its ruins, churches, and forts, and the casino-filled island gives Macau the nickname “The Vegas of the East”. We had an amazing time exploring both: taking selfies, eating all the street food, and even trying our hand at gambling again (much to my chagrin). 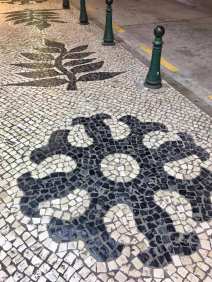 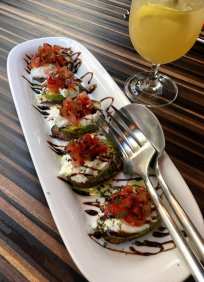 After a few days of strolling around Macau’s narrow alleyways, we took a massive speed boat (TurboJet) to our next destination just across the water: Hong Kong. This was actually our second trip to Hong Kong, but last time we didn’t quite get to everything on our list – this short stopover on the way to Midyear was our second chance. We had less than 24 hours in the city, but we managed to make it out to Lantou Island to see the incredible Buddha and cableway there, we took the bus to the top of Victoria Peak to watch the sunset over the city, and we went to Tim Ho Wan for the world’s cheapest Michelin Star eats. While I definitely preferred Macau’s laid back, European vibes, it’s hard to not like Hong Kong as well. Macau and Hong Kong are a couple of tiny islands (and respective peninsulas) that I highly recommend everyone to visit! No visas needed for US citizens! 🙂

All too soon it was time to fly to the Philippines and get to work. When we first landed in the Philippines it was chaos! Passengers getting up and grabbing their bags before the plane had stopped moving; people sitting on seemingly every inch of the floor in the airport; signs for flight changes being moved by hand from gate to gate; loud cover songs of 2000’s hits playing in every corner of the terminal, etc. All I could think was “Well, we’re definitely not in China anymore.” As we sat waiting for our flight though, the newness wore off, and it was easy to see that the Philippines are just plain fun! In fact, their national slogan is “It’s more fun in the Philippines”, and I totally got it. Smiles were everywhere! The flight attendants wore bright yellow polos and hummed songs as we boarded. Fellow passengers sang along with the music they heard on the plane. The joy was contagious!

The first week we were in the Philippines I had to “work”. I attended meetings with the other Fellows, we planned and executed various group activities, and generally bonded and reconnected after our last five months apart in our various host cities/countries. For this part of Midyear, we were put up in a resort on Mactan Island, which was incredibly fancy and not the sort of place Tucker and I usually go for (I’ve never heard so many “yes ma’ams” and “hello sirs” in my life). It was beyond beautiful though, and luckily Tucker was able to take full advantage of the beach, the snorkeling, the infinity pool, etc. However, after a few days completely devoid of local culture, I was definitely ready to get to our next location: Cebu City. It was here that we attended and presented at a local teacher training conference held at the University San Jose Recoletos. Easily my favorite part of Midyear, I was able to meet and interact with many local Filipina/o teachers and get a much better feel for what life in the Philippines is really like. 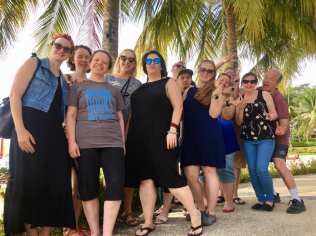 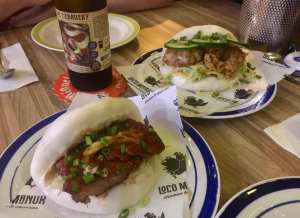 Once the conference and Midyear were officially over, Tucker and I hadn’t quite had our fill of the Philippines, so we headed to Manila for some good old-fashioned touristing. Manila is an incredible city with some of the best food I’ve had in a long while. Their specialty seemed to be fusion restaurants. We had super interesting and delicious food at Loco Manuk (Filipino, Peruvian, and Chinese) and El Chupacabra (Filipino and Mexican), and saw a Japanese-French Cafe that looked amazing as well! In addition to the incredible food, we also had a great time walking around Manila Bay, grabbing a drink in Intramuros (the Old Town), and watching the Super Bowl at a local expat bar. The Philippines boasts an amazing mix of languages and cultures, and it was so fun for us to be able to use English (commonly spoken there) to ask about a million questions of our taxi drivers, servers, and any other local we could find. We learned about the strong influence of Catholicism in the Philippines, the new-ish movement towards environmental clean up, and most of all we learned how welcoming and friendly the people are.

At this point we were over the halfway mark of our trip, and my body had had enough. I left Manila with a fever and several other ailments (not so fun to describe), but I was still super excited to see Singapore! We watched Crazy Rich Asians on another leg of this trip in preparation, but the movie doesn’t do the city justice. It is by far the cleanest city I’ve ever seen, and has represented its multicultural population incredibly well! Singapore is made up of large groups of ethnic Chinese, Malays, and Indians, and each has a dedicated area of the city where you can find their respective religious buildings, restaurants, and specialized grocery stores. Even with the diverse neighborhoods in place, the city as a whole really seems to cater to each group in so many ways. Colorful, artistic, and clearly very well-off, there are so many lovely parks and public spaces in this city, where we saw families wearing everything from tank tops and sundresses to saris and hijabs. I often talk about places where there is a mix of cultures, but its usually a watered down mix, where clearly one culture has dominated, but in Singapore they were all there loud and proud. It was amazing!

However, after a few days in Singapore I definitely had another “this is clearly not China moment”. Everything was so quiet, there weren’t many people around, and the “no spitting” signs actually seemed to work, as we saw absolutely no spitting while we were there! Signs like these were everywhere, covering the basics like “no littering $1000” and the bizarre like “no chewing gum $500”, ultimately giving the city a punny nickname: Singapore, a “fine” city. Tucker really loved Singapore – so many interesting foods to try, lots of activities to partake in (the Trick Eye Museum, Universal Studios, and beer tastings to name a few), but I was a little hesitant. It was almost a little too clean and a little too “nice” for me. I guess I like my cities a little more rough around the edges, but as far as a place to vacation and experience as many authentic Asian cultures and foods as possible, it has got to be number one on my list! 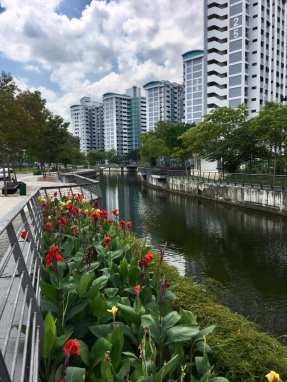 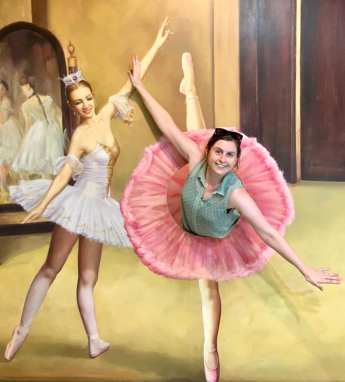 The last stop on this epic journey was Kuala Lumpur (usually called KL), Malyasia. We ended up taking a Transtar bus from Singapore to Malaysia because it was only about a 6 hour drive and the price was right. Little did I know that $30 was going to buy me the best bus ride of my life! We had recliners, tea service, lunch, personal TVs, and gorgeous views of the Malaysian jungles. If you’re ever in this area, take this bus ride! Upon our arrival in KL, I couldn’t help feeling a little like Goldilocks. The Philippines was maybe a little too outgoing for me, and Singapore was a little too uppity, was Malaysia going to be just right? 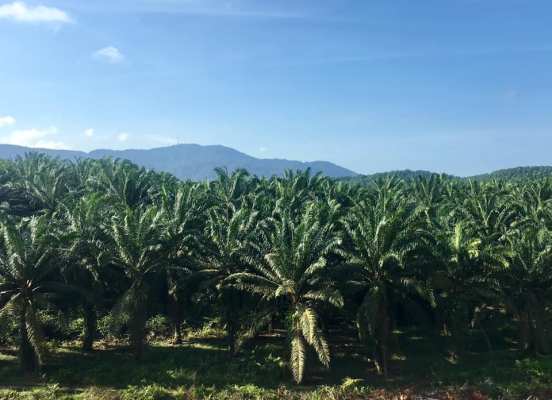 It turns out KL was full of surprises for us. The majority of people living in Malaysia are Muslim, so it was much more conservative than I was expecting. Most everyone wore long sleeves and pants despite the high temperatures, and the presence of beautiful and delicious “mocktails” was at an all time high for me. KL is actually not on an island, and to us, it seemed like we lost that friendly, carefree island-vibe as soon as we arrived. Interactions were a bit more abrupt and businesslike – like they usually are, I suppose. Another surprise was the color we saw all around us – both the Philippines and Singapore were incredibly colorful cities, but I think any city would be hard pressed to match the vibrancy of KL. Brightly colored murals everywhere, some of the lushest, greenest trees I’ve ever seen against the bluest of skies, and the insanely colorful Batu Caves just outside the city made for some incredible scenes (and photos).

There’s no possible way for me to share everything we saw and learned on this trip, but I hope you enjoyed reading a few of the details! After reflecting on any of our travels, it never ceases to amaze me how little I actually know about the world I live in, and taking trips like this only intensifies the curiosity I have for all the places I haven’t yet been to! I hope no matter where Tucker and I end up next, we can continue these adventures because this experience, like so many before it, was truly remarkable.